On Saturday, 28/09/2019, the fire station of Halle (Saale) carried out a large operational exercise on the premises of Finsterwalder Transport und Logistik GmbH. 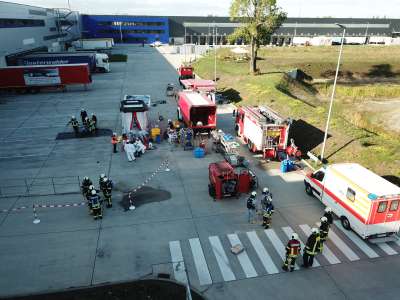 This morning, units and special forces of the professional and volunteer fire fighters trained tactical and technical procedures for rescuing persons that were injured and contaminated by hazardous substances in the event of an incident in a storage area.

The course of the training measures was developed in cooperation with Finsterwalder, who at the same time tested and checked internal, safety-relevant agreements and specifications. The Finsterwalder staff in charge presented a high safety standard.
In cooperation with the Halle (Saale) fire fighters, who visit the logistics halls at regular intervals, all components are tested regularly to ensure protection for employees and citizens of the city of Halle (Saale) at all times.
The training began at 09:00 am. In an assumed scenario, a 1000 l container fell from a forklift truck during loading work. Due to the drop of the approx. 1 t heavy container, several other containers with hazardous substances were damaged and an employee was trapped. This resulted in contamination by means of the leaked hazardous substance. Another employee who attempted a rescue was also partly covered by the hazardous substance and was injured in the process and in life danger.

Professional fire fighter units carried out a technical rescue by releasing the trapped employee using rescue equipment. The injured persons were quickly removed from the danger area and handed over to the Decon Unit of the Reideburg fire station. Accompanied by specialists, the  volunteer fire fighters carried out life-saving decontamination measures.

The decon volunteers had been trained and prepared in advance by CBRN instructors from the Halle(Saale) fire station. The procedure, the utilisation of decontamination techniques as well as the overall procedure of the decontamination measures were evaluated by inspectors, since this operation exercise was the final examination of the course.
The course "Decontamination of Persons" is unique in its format. The contents and the procedure were developed in Halle (Saale) and are intended for the specialisation of firefighters, rescue services and disaster control.

The fire fighter exercises form a part of the safety concept of Finsterwalder Transport und Logistik GmbH.
Mission exercises are the visible part of the collaboration. They serve to improve knowledge of the local situation by the rescue forces and to optimize operational procedures.
The experience gained will also be helpful for the rescue forces when working in other industrial environments.
For the Finsterwalder Group it is an important contribution to site safety.